What is a Contingent International Contribution, or CIC? 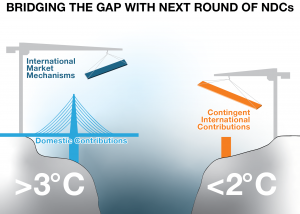 By Diana Movius and Peter Graham and Matt Piotrowski

Our forest policy team introduce the concept of a Contingent International Contribution (CIC), explain the benefits, and show how countries could make use of CICs to enhance their emissions reduction targets and help bridge the “ambition gap” in the next round of updated NDCs, due in 2020.

A Contingent International Contribution, or CIC, is a way for a country to enhance ambition within its Nationally Determined Contribution (NDC)[1].  Essentially, a CIC is a commitment to achieve a defined quantity of emission reductions that is contingent on the availability of international emissions reductions —  it is supplementary to the unconditional commitments to emissions reductions that a country makes in its NDC.

There’s a lot going on there that needs to be unpacked. But first, a little background.

Why do we need CICs?

The primary tool of the Paris Agreement is the requirement for each country to submit a Nationally Determined Contribution (NDC), which presents its commitment to reducing greenhouse gas emissions. Collectively, these NDCs are supposed to secure a future that limits the mean global temperature increase to “well below” 2 degrees Celsius above that of the pre-industrial age, while striving for 1.5oC. But the current commitments fall dangerously short of this goal.  Current NDCs are nowhere near strong enough to achieve this target; leading us to a catastrophic 3 degrees or more of warming by the end of the century.

Countries are expected to periodically update their NDCs with increasingly ambitious emissions reductions targets – what folks in the business call ‘ratcheting-up’ their ambition. Therefore, the next round of updated NDCs, due in 2020, needs to signal a global response commensurate with the 2-degree target.

The problem is that the political landscape in many countries is putting a serious constraint on the pace of emissions reductions – meaning that by 2020 domestic efforts alone are highly unlikely to bridge the “ambition gap” between where we are and where we need to go.

In light of these constraints, we need to develop as many innovative tools as possible to help countries in a position to do so to enhance their NDCs in-line with a “below 2oC” pathway.

The good news is that the Paris Agreement gives us the tools to increase ambition.  Now is the time to gain experience with these tools, to inform upcoming updates to NDCs. There are two ways a CIC could be conceived.

Countries could achieve a CIC through cooperative approaches.

The Paris Agreement includes Article 6, which allows countries to voluntarily cooperate to implement and enhance their NDCs, by using agreements called “international mitigation partnerships,” or “IMPs ” for short.

The problem is that as of now there is both a lack of established bilateral and multilateral arrangements to facilitate such cooperation, as well as a very limited supply of transferable, verified emissions reductions. This uncertainty makes it difficult for countries to make an unconditional commitment to using IMPs to enhance their NDCs.

Therefore, the CIC is would be included in a NDC on the premise that a country’s commitment to using IMPs is contingent on the supply of internationally-sourced reductions.[2] However, the commitment would nevertheless be expressed in the country’s enhanced NDC as a quantified objective or target in terms of GHG emissions reductions (tCO2e), thereby signaling both increased ambition and providing a “demand signal” to possible partner countries.

Countries could also achieve a CIC through other financial support arrangements allowed under the Paris Agreement.

Climate finance plays a vital role in supporting climate actions in lower-income countries. In Article 9 of the Paris Agreement, developed countries agreed to provide financial resources to assist developing countries in their efforts to mitigate and to adapt to climate change. However, in addition to the overall level of finance falling well short of the amount required, there is also the problem that the monitoring process does not provide nearly enough information to inform the Global Stocktake – the process through which countries will compare the cumulative expected mitigation of all NDCs with the amount needed to meet the Paris goals.

Let’s pause for a clarification: CICs are in no way a replacement for either stronger cuts to emissions at home or the use of IMPs to help achieve unconditional targets in NDCs. Instead, they must be considered another tool to supplement these efforts and help bridge the extremely wide ambition gap the world is currently facing. It is our belief that CICs can be an effective way to raise ambition while laying a foundation for the effective implementation of cooperative approaches under Article 6, and for linking international climate finance to NDCs and the Global Stocktake.

To date, the concept of “conditional” mitigation within an NDC has been presented solely by some lower-income countries; they specify the portion or component of their NDC that they would undertake if international finance (or support) is received, or other conditions are met. The CIC opens an avenue for higher-income countries to adopt a similar approach: to specify a quantified objective in their NDC that they will achieve if the supply of certified international emissions reductions is available. In this way, CICs would send strong demand signals to developing countries and stimulate the formation of more cooperative approaches.

For those wanting to dive deeper into this concept, download our recent report.

There is no silver bullet in the fight against climate change. It is one of the most difficult and complex challenges that humanity has ever faced and will require us to make use of every tool at our disposal. We believe that CICs are an important way to supplement ‘domestic-only’ ambition in the lead up to 2020 and beyond as we fight to keep the goals of Paris Agreement within reach.

[1] Before starting: If you’re unfamiliar with the goals of the Paris Agreement, or the terms “ambition” or “NDC”, you should start by reading this: https://unfccc.int/process/the-paris-agreement/nationally-determined-contributions/ndc-registry

[2] To be more precise, the conditionality in this context is two-fold: (1) on the establishment of bilateral or multilateral arrangements in accordance with Article 6; and (2) on the successful implementation of actions that result in increased emission reductions by sources or removals by sinks reported in the host country’s national GHG inventory.