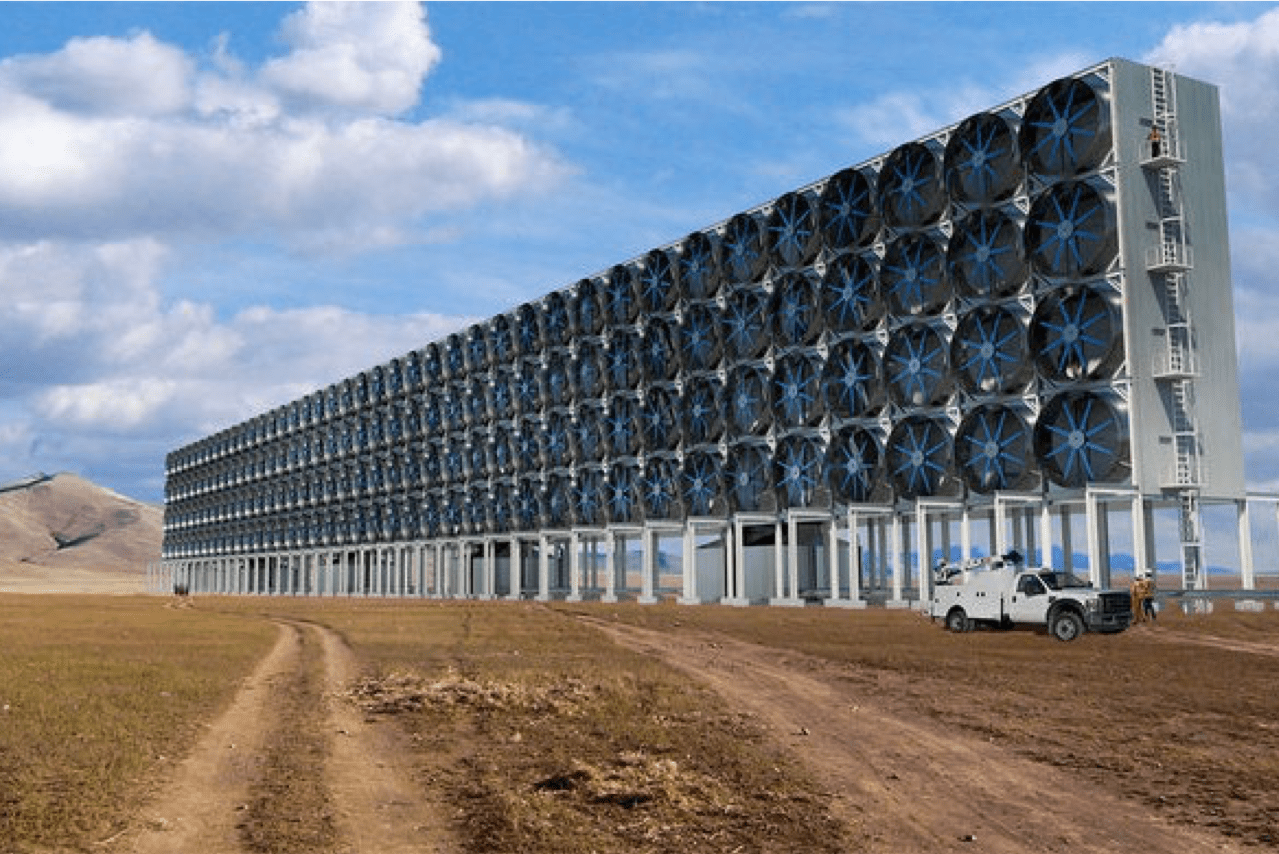 Matt Piotrowski and Ben Simonds present list of 12 companies that are leading the charge to develop Direct Air Capture and Carbon Capture Utilization and Storage in North America.

Wondering who is working on carbon removal (often referred to as “Direct Air Capture”, or DAC) and carbon capture (“Carbon Capture Utilization and Storage”, or CCUS) technologies in North America? Below, we’ve compiled a helpful list that includes brief company profiles with pertinent information.

In its recent Special Report, the Intergovernmental Panel on Climate Change clearly stated that there is no way to limit warming to 1.5 degrees Celsius without the help of technology that removes carbon from the atmosphere. The report identified a number of pathways to 1.5, but all of them relied to some extent on a contribution from technological carbon removal.

In the list below, we highlight who is working on developing this important technology in North America and what stage they’re at in terms of development and commercialization. We’ve also included companies working on CCUS. Technically speaking, this technology doesn’t remove carbon from the atmosphere, it captures it before it has a chance to enter. However, CCUS has many similarities with DAC and has experienced important economic, political, and marketplace breakthroughs in recent years that can inform and support the development of DAC technology.

Put simply, for DAC to be a viable and effective solution, the industry will have to scaled up dramatically. And to do that, companies will need to successfully monetize the technology – it’s too expensive to be commercially feasible at the moment. However, we have seen some very encouraging signs of progress that suggest significant breakthroughs may not be that far away. In a new report, we’ve outlined the recent political and economic trends in the U.S. and have made a number of policy recommendations that we believe will help unlock the full potential of this nascent industry.

At the moment, Global Thermostat and Carbon Engineering are the two main North American companies currently utilizing DAC. Given that taking CO2 out of the air and permanently storing it underground is costly, their business models depend on using the CO2 to create a market by converting it into materials for plastics, synthetic fuels, beverages, or other commercial products – similar to what the Swiss-based Climeworks is intending to do.

Ultimately, the viability of this business plan depends on the captured CO2 contributing to valuable mass-market products. Both companies are nearing commercialization – Global Thermostat with a DAC plant in Huntsville, Alabama and Carbon Engineering with one in Squamish, British Columbia.

The main U.S.-based DAC company, Global Thermostat was launched by Graciela Chichilnsky and Peter Eisenberger, formerly a physicist with ExxonMobil.

Carbon Engineering Ltd., based in British Columbia, is nearing the commercialization phase, using DAC to either sequester the CO2 underground or use it to produce transportation fuels.

Founded in 2007 and an XPRIZE finalist, CarbonCure is one startup company in the CCUS space that is seeing growth. Its technology takes recycled CO2 sourced from an industrial emitter and injects it into concrete when it is mixed.

Based in California and founded in 2006, Blue Planet converts CO2 to carbonate and then turns it into limestone rock, which is then incorporated into concrete.

A Silicon Valley startup, Calera has aimed to configure its operations around repurposing CO2 as concrete.

Solidia Technologies is another company that is using CO2 in cement and concrete.

Launched four years ago and based in Calgary, Carbon Upcycling Technologies is turning CO2 into a product to prevent erosion in infrastructure.

Based in Northern Virginia and an X-Prize finalist, C2CNT converts CO2 into carbon nanotubes, a product that can be used for numerous purposes, such as construction, energy storage, and strengthening industrial materials.

An X-Prize finalist, C4X is incorporated in both Canada and China. Its technology converts CO2 into chemicals and plastics.

Based in Huntington Beach, CA and founded in 2003, Newlight Technologies has reached the early commercial stage, but still needs $15 million in funding.

Made up of scientists and engineers at the University of Toronto, CERT has developed a system to convert CO2 into chemical feedstocks.

An XPRIZE finalist, Carbon Upcycling UCLA is a group of engineers at the University California, Los Angeles (UCLA) that has developed technology to convert CO2 into CO2Concrete.