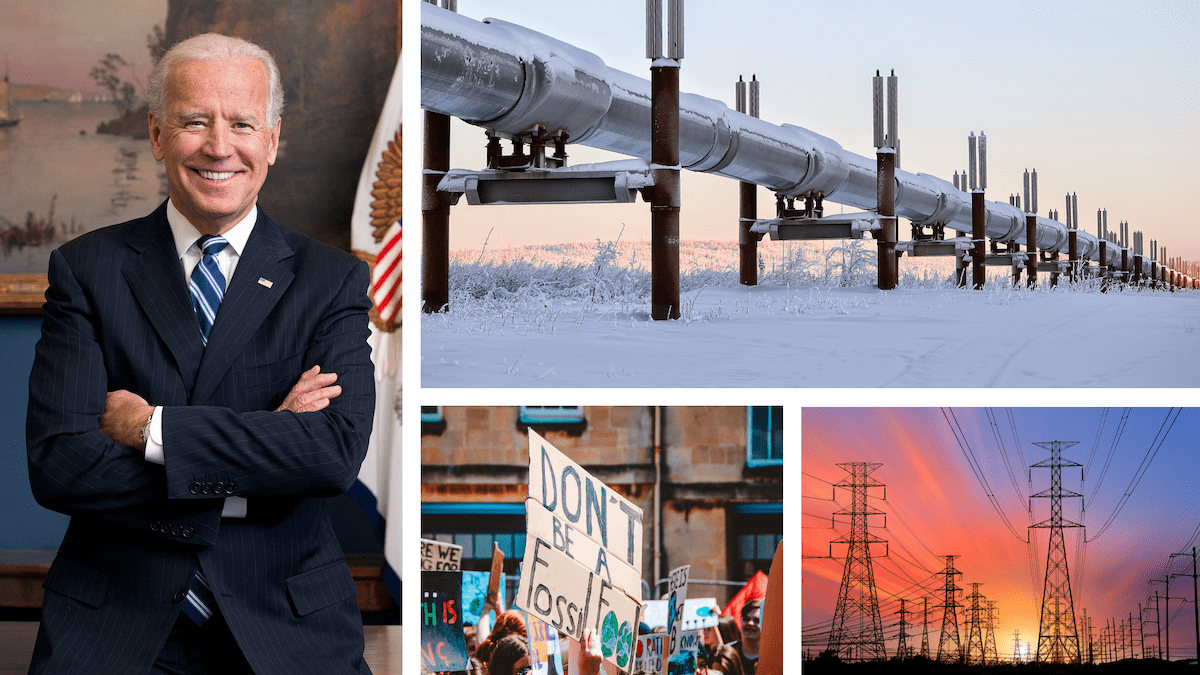 Natural gas in the United States has become king. Might Biden end that?

Natural gas has become king of the U.S. electrical grid. The fossil fuel’s ability to pair with the growing outputs from intermittent renewables and to beat coal on price has allowed natural gas to grow significantly over the past two decades.

During the Obama administration, natural gas really took off. With the expansion of fracking, cheap capital amid low-interest rates, a favorable regulatory environment, natural gas was pitched as the “bridge fuel” to develop a cleaner electrical power system. But will a Biden administration speed up the end of natural gas’ ‘bridge’ role in America’s power sector?

Natural gas emits less carbon dioxide than coal and claims responsibility for decreases in U.S. emissions intensity for the past few decades. However, as the now dominant fossil fuel, activists and elected officials have begun to ask when this bridge fuel will finish serving its purpose?

The IEA has recently declared that building new solar and wind is often cheaper than keeping existing gas plants running. Coal is increasingly seen as a ‘dead’ or ‘dying’ power source in the U.S. despite its still dominant global presence. This leaves the next largest source of emissions in the power sector for the climate-conscious to tackle — natural gas.

Methane, the stuff natural gas is made of, has become the center of attention for environmentalists who claim we have been inaccurately estimating its emissions. Methane’s impact is more damaging to the climate than carbon dioxide, and as corporations and governments around the world are setting net-zero targets, more and more leaders are being challenged to meet those goals without using gas.

With Biden set to be president in early 2021, U.S. natural gas use could peak sooner than expected due to lower costs of renewables, state and national policies, corporate and utility climate commitments, and an increasing lack of investor interest.

Joe Biden’s platform is to achieve net-zero emissions in the power sector by 2035. This would primarily be met by increasing the share of renewable energy, increasing energy efficiency efforts, and potentially relying on offsets or carbon removal. In order for natural gas to participate in that envisioned power sector in 2035, the industry would have to rely on cheap offsets, shifting to renewable natural gas or hydrogen, and likely carbon removal technologies outcompeting renewables and energy storage on cost, or hope for a future political shift that eliminates the net-zero 2035 goal.

Within his initial four-year term,  Biden could implement new regulations to make the 2035 goal more likely to the detriment of natural gas.

Regulating Methane Emissions: Tightening regulations would bring about a return to the regulatory environment the industry faced before the Trump administration overturned Obama-era rules. Stricter methane regulations on new and existing wells would make production more costly but would not necessarily bring about a sharp drop in output. These increased costs could easily pile on top of other market woes to dampen the industry’s outlook though.

Climate Impact Assessments: Measuring the climate impact of new infrastructure may negatively impact supply growth. The Biden platform says, “…every federal infrastructure investment should reduce climate pollution, and require any federal permitting decision to consider the effects of greenhouse gas emissions and climate change.” These types of analyses could limit the growth in both new gas pipelines and new LNG export terminals—but not those currently operating or in the process of being built. With limited growth in new infrastructure, gas companies may in turn cut production or limit drilling new wells. How aggressive Biden is in this area would likely depend on who he chooses to run agencies such as the Department of Energy (DOE) and the Federal Energy Regulatory Commission (FERC).

The United States is expected to increase its role in the global gas market as production growth is forecast to outpace the rise in demand. This forecast, however, may not be realized in a different regulatory environment. Foreign markets also play a role. In France, for instance, the government has made French company Engie delay signing a long-term LNG deal with a U.S. supplier because of environmental reasons, underscoring the risks the industry may face in trying to sell its supply overseas moving forward.

Ban On Expanding Drilling On Public Lands: Over the past 10 years, oil and gas output on public lands and waters accounted for approximately a quarter of the country’s total, although the share has declined over time as supply on private land in the country’s shale patch exploded. Most onshore gas production is located in the western United States, while most offshore gas is in the Gulf of Mexico. Currently, some 26 million acres are leased to oil and gas companies, with about half of that producing volumes. When shale gas produced on private acres begins to decline, the significance of bans on public lands would become more significant.

Renewables Beating Natural Gas at Its Own Game

Market forces could play just as big a role as regulations in altering the outlook for natural gas. Natural gas could eventually go the way of coal with a slow and steady decline. Natural gas was a big winner as its own share has risen from 24 percent to 38 percent during the past decade. Analysts continually predicted that gas would dominate the electricity sector for decades, but the times are changing.

Solar prices are falling quickly, accelerating the transition to clean energy and making the net-zero target by 2035 for the power sector achievable. With solar prices coming down so quickly, it is more difficult for policymakers and market analysts to describe gas as a bridge fuel, particularly with the public having a negative image of fracking.

The growth of offshore and onshore wind in the United States will also impact natural gas. Industry forecasts suggest U.S. offshore wind capacity could grow to 154 to 193 gigawatts, and onshore wind to 330 gigawatts by 2030. In 2019 natural gas accounted for 477 gigawatts of electric generation, meaning new wind resources by 2030 could be equal or greater than existing gas scenarios in certain scenarios.

However, the IEA warns that global gas demand will still grow by 30 percent in the next two decades. In the United States, demand should remain mostly flat until the 2030s, when it starts rising again, driven by industrial consumption rather than growing use in the power sector. But increased efficiency gains, electrification, and changes in policies could change this outlook, further undermining gas’ long-term outlook.

Much of the current and future demand for natural gas will be reliant on residential and commercial heating. Biden’s climate plan calls for “a target of reducing the carbon footprint of the U.S. building stock 50 percent by 2035” which may mean a greater expansion of heating and appliances electrification in buildings. Commercial and residential buildings accounted for nearly twelve percent of U.S. greenhouse gas emissions in 2018 and electrification could significantly cut into those emissions. Cheaper renewable energy prices make it more likely that more electrification could take place.

Benchmark U.S. natural gas prices recently rose to $3 per MMBtu for the first time in two years, but the increase cannot mask longer-term worries for investors. Investor enthusiasm for oil and gas companies is dwindling, another warning sign for the industry. Given the weaker market fundamentals and the possibility of stricter regulations, investors may further steer clear of oil and gas stocks.

A recent survey by Boston Consulting Group confirms this view. Only a quarter of investors see oil and gas increasing in their portfolios in the next decade, while an overwhelming majority are “feeling pressure” to increase their exposure to renewable energy. Under a Biden administration, financial regulators such as the Federal Reserve or Securities Exchange Commission could require fossil fuel companies to disclose climate risks, which would further push investors away from the industry.

Weakening industry fundamentals have also facilitated recent mergers and acquisitions in the industry. Gas producer Pioneer Natural Resources is looking to buy Parsley Energy, while other large independent producers are also in talks to merge. ConocoPhillips has purchased Concho Resources for almost $10 billion worth of stock. More deals could soon come as the economic fallout from COVID-19, along with the bleaker market outlook, has significantly altered the enthusiasm for investing in the sector.

U.S. natural gas production is still, despite the current backdrop, expected to rise, but slower growth than originally anticipated could lead to higher prices. The EIA says that in a lower-growth scenario, natural gas prices could continually rise and triple in the next three decades. Lower U.S. supply, coupled with higher prices, could have wide-ranging implications for the global market, tightening supply-demand fundamentals in importing markets. But a looming supply crunch is not inevitable.

Global demand will take a while to rebound after falling this year due to COVID-19, and just as importantly, other major producers are poised to go forward with new LNG projects, such as Qatar, which is forging ahead with major plans. In fact, the number of new projects coming online in the coming years could bring about a global glut, particularly if demand underperforms. “LNG could be the last great gold rush of the fossil fuel era,” said a columnist for Quartz.

Natural Gas Is the Next Target

The last major issue for natural gas is its decreasing popularity. Climate and environmental activists have achieved major anti-gas pipeline victories over the past few years due to the increased animosity against gas bolstering their ranks and treasure chests. This Presidential election has focused heavily on pro vs. anti-fracking positions, but polling shows the majority of Americans are against fracking (including swing states where natural gas employs significant numbers of workers).

A Biden administration will likely be challenged at every step during their climate efforts to not be friendly with the natural gas industry. Even now, activists are advocating for individuals tied to the gas industry to be excluded from his administration.

The industry knows it has a PR problem as evidenced by increasing attempts to run campaigns targeted at millennials, Gen Z and minority communities to explain the benefits of natural gas. However, these efforts have a major hill to climb as these groups are more supportive of the development of solar, wind, and hydropower sources over developing more natural gas. These groups will continue to increase their share of the voting population and hold more sway over what new resources get added to the system. With renewables now cost-competitive, and in some cases, out-competing existing gas generation, it is possible they will initiate policies that speed up the end of reliance on gas for the electric system.

The growth in opposition to natural gas from these constituencies makes it more likely that additional policies like a carbon price that could cap natural gas growth, or a clean energy standard that would lead to a natural gas drawdown are more likely to become law. Additional policies focused on environmental justice, which feature heavily in Biden’s plans, might place further restrictions on natural gas power plants located near frontline communities. Biden’s plan calls for 40 percent of his planned $2 trillion climate investments to go towards these communities to clean up or replace polluting facilities like natural gas infrastructure.

Verdict: Offramps Abundant, But End Not in Sight

To stay competitive the natural gas industry will have to overcome its image problems, develop strong offset programs, turn to still nascent technologies like renewable natural gas, hydrogen production, or carbon removal technologies to thrive for the next few decades. The next four years under a Biden administration will be vital to building that platform.

However, the Biden administration itself could not, and seemingly would not, end the use of natural gas in the power sector within its first four years. Completely decoupling from natural gas by 2035 is also a long shot. A lot can happen in fifteen years, but over the next four years, in a Biden administration, there will likely be multiple opportunities to speed up the ride across the natural gas bridge to a new power industry dynamic in the U.S.