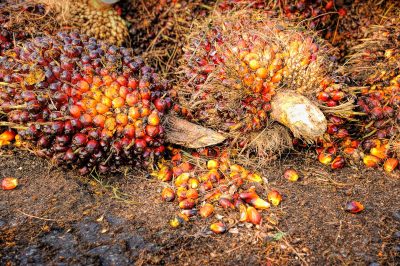 Matt Piotrowski and Sarah Lake provide an early look at an upcoming report detailing how palm oil producers can continue with “business-as-usual” practices as the rest of the industry and world increases demands for change.

The global palm oil industry, long recognized as a leading cause of deforestation, is beginning to turn a new leaf as a growing number of industry members respond to international calls for more sustainable production practices. But the wider picture is far from rosy.

Unfortunately, companies striving for sustainability are still very much in the minority. The members of the Roundtable on Sustainable Palm Oil (RSPO), which commit to sustainable industry standards, produce 14.65 million tonnes – 19% of global supply – of palm oil that meets their RSPO-certified requirements. Dozens of major companies are absent and continue to commit highly concerning acts of deforestation, as well as other labor abuses and land rights violations.

The problem is that many of these companies seem to be immune to outside pressure to adopt more sustainable practices. This means that even as some companies move in the right direction, certain actors will continue to be a serious threat to any efforts to halt deforestation and combat climate change.

In a soon to be published report, we took a look at the five largest palm oil companies in Southeast Asia that are not members of the RSPO to pinpoint the conditions that allow them to resist change, and from there, come to a better understanding of the action needed to bring about reforms.

We also found that there is still more than adequate demand for unsustainable palm oil. In instances when the companies’ products have been added to blacklists, there have always been other buyers waiting in the wings. For example, even when IndoAgri was blacklisted by large buyers like Mars, Nestle and Wilmar, it was able to rely on its parent company Indofood, together with a stable group of other companies, to continue selling its product. The financial performance of IndoAgri took significant hits with each blacklisting but continues to operate given access to Indofood as a major buyer.

But some of the findings were more surprising. Notably, the extent to which major Western financial institutions are invested in these companies. This financing sends a signal that they can continue to conduct business-as-usual.

While this is deeply discouraging, it also presents one of the greatest opportunities for action. Western financiers – together with major buyers – linked to these producers have a chance to introduce new pressure for change. These financial connections may not be solely connected to palm oil production within these companies but the relationship still allows an opportunity to encourage greater sustainability efforts.

While the hope is that sustainability concerns alone should be motivation enough for financiers to encourage better behavior, there is another reason that financiers should find convincing: self-interest. There are growing indications that investing is sustainable palm oil protects the bottom line. Recent analysis has shown the high correlation between a lack of commitment to sustainability and worsening economic performance. When we compared the performance of RSPO members against non-RSPO members, during the period from 2012 to 2018, we found that members outperformed non-members by 25%, making them a better investment.

There is also the opportunity to make a much stronger case at the local and national levels about the risks associated with unsustainable practices. Although consumer pressure on sustainability issues is absent or lacking, it is estimated that over 100,000 people in Southeast Asia die each year due to health impacts from fires. The industry has also been the target of numerous claims of land-grabbing and injustices against indigenous populations. Business-as-usual for these companies will actively build a case against themselves amongst their regional customer base.

The companies we have analyzed represent a shrinking portion of an industry that is largely moving towards a more sustainable future. They are almost certainly not alone though in exhibiting resilience to market trends and outside pressure from governments, NGOs, and major palm oil buyers.  However, there are visible chinks in their armor such as worsening financial performance. Increased engagement for sustainability from western financiers and a rise in calls for change from the Southeast Asian market could initiate significant changes.

Our upcoming report clearly shows that unsustainable companies still dominate the market and hold back efforts to make an industry-wide change.  It is likely that these five companies are not alone in relying on majority shareholders and markets that are not influenced by calls for sustainability to stay afloat. It is just as likely that other industries are experiencing similar holdouts immune to traditional pressures. To start a new chapter for the palm oil industry we need to advance and coordinate pressure from all channels. Western financiers who can help build a global effort for industry change will be especially important.