The Law That Could Break the Amazon 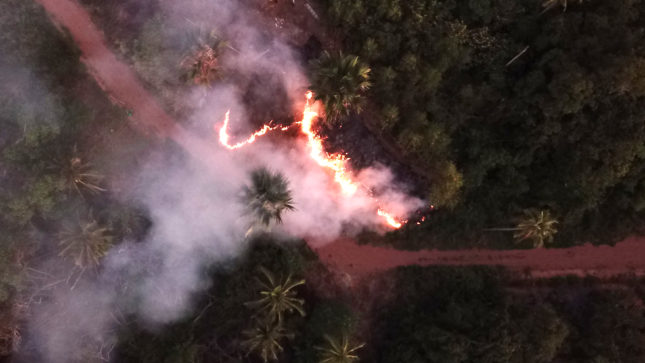 Increased and legalized deforestation is possible under a potential Brazilian law legitimizing the land grabbing tied to the Amazon fires.

As fires and overall deforestation in Brazil continues to grow at a high rate in 2020, the situation could get even worse.

Attention is being diverted from environmental protection to the massive COVID-19 outbreak the country is seeing. At the same time, the upcoming fires season this summer is likely to lead to greater forest loss. If these two factors are not alarming enough, a new law being considered by Brazil’s Congress could also lead to a significant amount of more land being opened to development.

Brazil’s controversial PL-2633/2020, legislation under consideration by the country’s Congress, would have wide-ranging ramifications for the country’s forests and indigenous groups, many of whom have been hit hard by COVID-19. PL-2633/2020 would make it easier for individuals to obtain titles to public land in the rainforest and grant amnesty to many current illegal occupants of public land. Conservationists have long sought federal action to criminalize these land grabs, which are responsible for the majority of deforestation in the Amazon, while the government has often sought to facilitate them, especially since President Jair Bolsonaro took office early last year.

This bill is just the latest such effort, but the overwhelming backlash against it has caused it to stall in Congress. With the spotlight on a worsening healthcare crisis, the Amazon rainforest is quickly approaching the tipping point of exceeding its planetary boundaries. Deforestation is accelerating, with 150,000 hectares already cleared so far in 2020. The imminent fire season promises to destroy even more areas in the Amazon. This perfect storm has prompted many NGOs, foreign governments, and celebrities to speak out against PL-2633/2020. Moreover, companies are under intense pressure to recalibrate the financial implications of deforestation risks in the Amazon. See the figure below for which stakeholders have spoken out against PL-2633/2020 versus the small number of groups in favor of it.

Implications of PL-2633/2020 on deforestation and land grabbers

If PL-2633/2020 passes, this will be the second time the government has extended the amnesty period for landgrabbers, having already legalized occupations from 2004 to 2011 in 2017.

Passing PL-2633/2020 would reinforce a message that the government is already sending, that it condones land grabs, deforestation, and the displacement of and violence against the indigenous communities currently occupying much of the land in question. These already-prevalent trends are liable to increase, with significant consequences for the people of Brazil, for the Amazon, and for the world’s prospects of keeping warming to under 2 degrees Celsius.

The bill is likely to bring about large land grabs, with several individuals combining different claims into a very large one. The bill’s proponents have disputed this claim, saying that the bill is necessary to facilitate the regularization of claims by small farmers trying to eke out an existence in the Amazon, an impression bolstered by the fact that many relevant visions are included in the present bill.

However, as biologist Philip Fearnside has pointed out in a commentary for news outlet Mongabay, most of these provisions are already codified in existing law. “The inclusion of these repetitions serves to allow a discourse claiming that the new law is ‘needed’ to benefit small farmers,” Fearnside says. “The new parts of the law are those that benefit large land-grabbers.”