The New Supreme Court and Climate 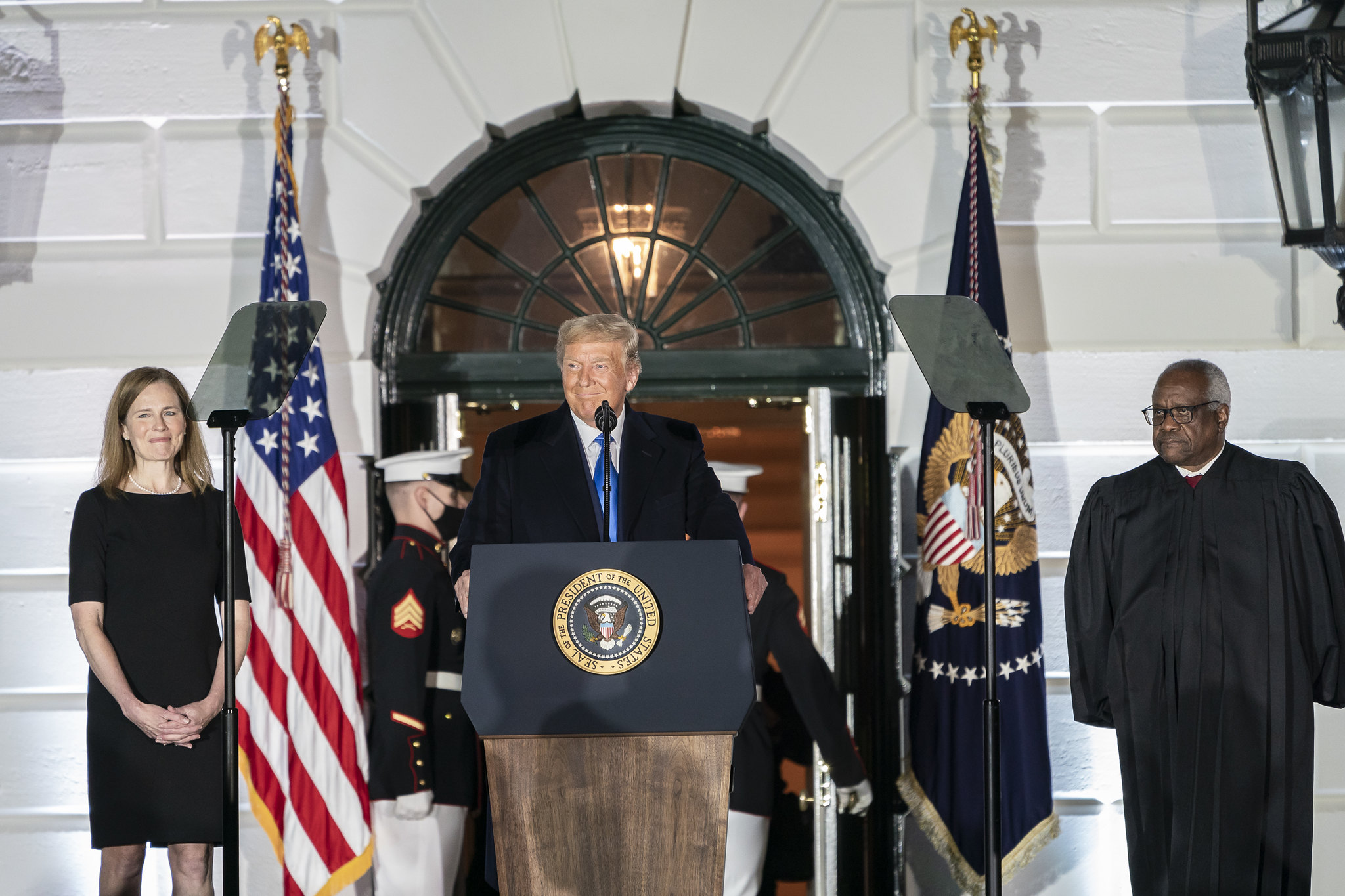 Although much of the national attention has been focused on the election, a change with long-term ramifications has occurred at the top level of America’s government in the Supreme Court.

After a contentious process in the Judiciary Committee and an unsuccessful Democratic filibuster attempt on the Senate floor, the Senate voted 52-48 on October 26 to confirm Justice Amy Coney Barrett to fill the late Justice Ruth Bader Ginsberg’s seat for a life term. Justice Barrett was sworn in later that same day. She is President Trump’s third appointee to America’s top court, a decision that will have enduring consequences. This brief will explore what the new court balance and this new associate justice mean for U.S. climate and clean energy policy.

Given congressional gridlock over the past several decades, regulatory rulemaking by environmental agencies has become the primary way the United States sets national-level environmental policy. Like all U.S. Federal regulations, environmental rules are subject to judicial review by U.S. Federal Courts.  Many of the most important of these cases end up being decided by the U.S. Supreme Court. Under U.S. law, individuals, companies, or other parties affected by a rule may challenge the regulation if they believe it exceeds the authority granted to the agency by Congress or violates a constitutional or statutory right.

In previous decades, the Supreme Court decided many energy and environment cases in a green direction, often by large majorities. Even so, the Court decided other landmark climate cases by the slimmest margin. With nine Justices on the Court, five justices are needed for a majority. For the past decade, more often than not, on closely divided cases, Justice Kennedy held the decisive “swing vote.” When he was replaced by Justice Kavanaugh in 2018, Chief Justice John Roberts, a conservative nominated by President George W. Bush, who has led the court for nearly 15 years, became the swing vote. With an additional conservative justice on the bench, some legal scholars have speculated that President Trump’s last Supreme Court selection, Justice Kavanaugh, could become the “swing vote” on environmental issues.

Justice Kavanaugh has a long history of rulings on environmental issues from his time on the U.S. Court of Appeals for the District of Columbia Circuit. He has consistently taken a sharply critical view of the tactics used by executive branch agencies, such as the Environmental Protection Agency (EPA), to interpret existing law in a manner that confers on these agencies to authority to regulate new areas of the U.S. economy, including greenhouse gases. Justice Kavanaugh’s not very green stances and the rightward shift of the already conservative Supreme Court could endanger a number of key judicial principles and common law precedents on which U.S. climate policy rely, including those adopted under the all-important Clean Air Act. More specifically, because the Supreme Court has the power to strike down or overturn its prior cases, President Trump’s influence on the Court through his nominees has thrown into question whether future presidents can rely on the Clean Air Act when taking climate action. This would leave the ability to set climate policy largely to Congress, which as noted previously has never passed major legislation limiting U.S. climate pollution.

Justice Barrett and the New Court

Justice Amy Coney Barrett’s appointment departed from longstanding U.S. political norms, under which the nomination and confirmation process during an election year would have been left up to the winner of the election. Instead, Republicans chose to break with tradition and push forward at a breakneck pace, garnering ire from Senate Democrats whose attempts to fill Justice Scalia’s vacant seat eight months before the 2016 presidential election were thwarted by Republicans who claimed then (but not now) that confirmations should not occur in an election year. Senate Democrats tried to delay the confirmation at every turn by boycotting votes on the Barrett nomination in the key Senate committee, unsuccessfully attempting a filibuster, and threatening to withhold the quorum required to hold a vote on the Senate floor.

Justice Barrett’s confirmation, despite these tactics, now gives conservatives a 6-3 majority on the Supreme Court and marks what could be a dramatic reduction in executive branch regulatory power, affecting cases on energy, the environment, and climate change.

During the confirmation hearings, Justice Barrett was roundly criticized by climate activists and Congressional Democrats for refusing to acknowledge mainstream climate science and facts. She stated instead that climate change is “a very contentious matter of public debate.” As a result, some climate lawyers have called into question her ability to “fairly assess the validity of laws and regulations enacted to address it.” Republicans defended Justice Barrett, saying that the courts have used that phrase to describe climate change and instead defer to the knowledge of experts and scientists.

Overall, Justice Barrett’s tenure on the Supreme Court could damage environmental law in two main ways. These include:

The newly enlarged conservative majority could dramatically shift the court’s balance and possibly overturn a 2007 case, Massachusetts v. EPA, in which the Court interpreted the Clean Air Act broadly enough to include regulation of climate pollutants, setting the stage for the Obama administration to subsequently regulate greenhouse gases using that statute. The court could curtail the ruling’s reach or even overturn (eliminate) the case as a basis for executive branch action altogether. Two of the Court’s conservative Justices Alito and Thomas, have previously called for it to be overturned. In addition, Massachusetts v. EPA was the impetus for the EPA’s 2009 “endangerment finding,” which stated that climate change is hazardous to human health and must be regulated. That rule is the main reason that the Trump administration could not reverse all climate regulations put into effect under President Obama. While completely overturning that prior court case is possible, the Court is more likely to use a new case to narrow the scope and reach of Presidential power to combat climate change under the Clean Air Act, as in effect today. In this manner, the expanded conservative majority on the Court could curtail Biden’s ability to deliver on promised initiatives to strengthen emissions regulations and create new major ones through executive action. This would likely slow the adoption of stringent new regulations on electric power generation, vehicles, methane and much more. In addition, new Court decisions could make it harder for the Biden Administration to overturn some Trump-era regulations and/or reinstate prior Obama era regulations relating to climate and clean energy.

In addition to narrowing and weakening existing environmental statutes, the new Court could also make it much easier for all Federal courts to overturn administrative actions and new regulations adopted by the Executive Branch. Under a 1984 Supreme Court decision, Chevron v. Natural Resources Defense Council, U.S. common law currently requires Federal courts to give deference to administrative actions taken by the Executive Branch. The Chevron case requires Federal courts to uphold administrative actions that are based on allowable interpretations of existing law so long as those administrative actions are not “arbitrary or capricious.”  In other words, actions taken by the President or his administration that are of a regulatory manner are presumed valid unless a court finds compelling evidence that the Agency has acted badly.  Conservatives have long hated this presumption in favor of Federal agencies because it makes new regulations very difficult to overturn through litigation. Several conservative members of the Supreme Court have advocated for overturning (invalidating) the Chevron standard of deference. With Justice Barrett’s confirmation, a majority of the Court is likely to strike down Chevron and thereby handicap future environmental rulemaking by Federal agencies. As a law professor at Notre Dame before joining the Judiciary, Barrett was critical of judicial deference to regulatory agencies, calling it “not a hard-and-fast rule.”  Chevron deference to agencies underpins much of modern U.S. regulatory law. A shift away from this doctrine worries climate change advocates because Chevron now provides the EPA substantial latitude to adopt climate-friendly regulations and this power may be removed or narrowed soon by the high Court.

Justice Barrett’s judicial philosophy also could have a major impact on U.S. climate and clean energy policy. Like her mentor, former Justice Antonin Scalia, Justice Barrett considers herself an “originalist.” This means that she attempts to interpret the U.S. Constitution and Federal statutes in the manner as the original authors of the text. Unlike liberal justices, whose judicial philosophy tends to favor treating the Constitution and statutes as living documents whose interpretations evolve over time to reflect larger underlying concepts, originalists interpret the Constitution and statutes narrowing, giving only the meaning and power to those laws that were intended at the time of adoption.

Since the Constitution of the United States gives the President responsibility to faithfully execute Federal law, an originalist judicial philosophy tends to narrow the scope of that power compared to a liberal approach. Presidents can only rely on statutes and Constitutional provisions for the narrow precise authority intended at the time of adoption. This philosophy has huge implications for U.S. climate policy, in particular. Most existing U.S. climate regulations have been promulgated by Federal agencies under laws that were adopted by Congress prior to deep public understanding of and concern regarding the threat of climate change. This is true of the Clean Air Act, for example. That statute was adopted in the 1970s. It was revised slightly in 1992 when global concern about climate change was still in its infancy. Not surprisingly, therefore, the statutory record for the Clean Air Act does not provide a deep basis for concluding that the original authors intended the EPA to reduce greenhouse gases. A newly conservative Supreme Court dominated by originalists, therefore, is more likely to invalidate climate regulations on the grounds that the statutes under which the regulations were adopted were not intended to address global warming.

It is not yet known exactly what the impact Justice Amy Coney Barrett’s ascension to the Supreme Court will have on U.S. clean energy and climate action, but it is clear that the consequences of her appointment will far outlive the presidency of Donald Trump. If she follows in her predecessor’s shoes, Justice Barret’s lifetime appointment could mean that she will continue to have an impact on climate policy for the next forty years – deciding cases on executive orders, agency policies, and legislation that has not yet been written. The new, more conservative Supreme Court could hamper the Biden administration’s attempts at climate policy through executive action and force all climate policy decisions to be made in Congress through the legislation, which could also face legal challenges that end up in the Supreme Court.